“Darn it, no one ever buys the T-rexes.”— Cliff Briscoe

The Dinky the T-Rex souvenir is a miscellaneous item in Fallout: New Vegas.

Referred to as "Dinky the Dinosaur(TM) Officially-Licensed Dino-Action Dolls" before the war, the T-Rex souvenir is a miniature replica of the Dinky the T-Rex roadside attraction, home to Novac's Dino Bite gift shop.[1]

The town's gift shop has the highest quantity, with 1000 in stock. There are several more apart from those for sale in a storage closet (the locked door behind the counter), where they can be found on the ground, on shelving, and in metal boxes. In addition, five toys are sitting on the Dino Dee-lite front desk counter.[2]

The owner of the shop, Cliff Briscoe, mentions the figurines right away in conversation with the Courier, letting them know that if they stopped by looking for the t-rexes, they were just in time as there were still a few left.[3] There are two signs advertising the figurines inside of the gift shop, one behind the counter and one to the left of the stairway up to the sniper's nest. Cliff refers to the toys as the store's "bread and butter" and encourages the Courier to purchase them.[4] He is enthusiastic if they choose to do so, but if the player character inquires about guns and supplies instead, Cliff will answer dejectedly, mentioning that "no one ever buys the T-Rexes."[5][6]

The Courier can buy the 1000 dinosaur replicas from him, yet no matter how many Dinky souvenirs are purchased, the next time Briscoe's inventory refreshes, he'll have 1000 Dinky souvenirs once again. Cliff responds will equal excitement each time a purchase is made. 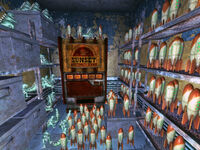 Lots of Dinkys in the storage room!