“Well, there's Dinky, the town mascot. He's a sight. You probably already saw him when you came in, but you can go up inside, too.”— Jeannie May Crawford

Dinky the T-Rex is the name of a landmark in Novac in 2281, part of the Dino Dee-lite Motel complex.[1]

Dinky served as a roadside attraction before the Great War. Now the construct houses a pair of snipers, Manny Vargas and Craig Boone, taking shifts defending the town from the vantage point of Dinky's mouth.[2] Manny covers the day shift and Boone covers the night shift. If approached, each sniper will shirk conversation, instructing the Courier to speak with them later.[3][4]

Dinky is situated along Highway 95, visible from a distance due to its height.[5] [6] The dinosaur holds a thermometer, having taken a bite out of the top, that advertises the motel and amenities such as color television.[7]

The structure can be accessed from the left or right of the Novac fence. A door and set of stairs on the side of the dinosaur is the entrance to Dino Bite gift shop. Another interior set of stairs provides access to the mouth. There is a room behind the counter containing rocket souvenirs and the unique weapon, That Gun.[8] The motel itself is located behind Dinky, across the courtyard.

Dinky the T-Rex appears in Fallout: New Vegas and is mentioned in the add-on Honest Hearts. 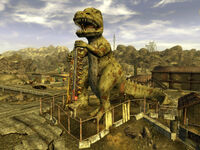 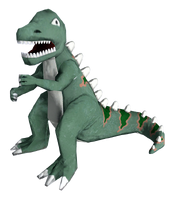 The dino toy modeled after the Novac T-Rex