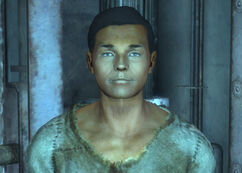 Diego is the 18-year old[1] acolyte to Father Clifford at Saint Monica's Church in Rivet City in 2277.

Born in 2259, Diego is Father Clifford's assistant. He came to Rivet City a few years ago with his father but was abandoned. Father Clifford took Diego in and the two have become like father and son. Diego assists Father Clifford with his church work and wants to be a priest when he gets older. He has strong feelings for Angela Staley and spends much of his free time with her. However, he is also devoted to the church. Because she is only 16, he does everything he can to keep his feelings secret, although Angela sees right through him[1].

Diego considers Father Clifford his only family, however, he has strong feelings towards Angela Staley and spends most of his free time with her.

During the night and day, Diego can be found in or near Saint Monica's Church. From in the late afternoon to early in the evening, he can be found together with Angela Staley on Rivet City's flight deck.

Diego appears only in Fallout 3.

Retrieved from "https://fallout.fandom.com/wiki/Diego?oldid=3353361"
Community content is available under CC-BY-SA unless otherwise noted.