00000293
“That's a shame. A conversation with a genuine mutant like you? It'd certainly paint me a picture of what life's like in that radioactive hell on the mainland.”

President Dick Richardson is an Enclave executive who presides on the Enclave Oil Rig in 2242. He is the overarching antagonist of Fallout 2.

Dick Richardson's political career began sometime prior to 2215. In August 2215, he rose to power as a congressman within the Enclave, aided by political pressure from his father, President Richardson.[Non-canon 1] Five years later, on March 5, 2220, Dick was elected president, once again aided by his father.[Non-canon 2][1] He began serving the first out of his five terms.

As president, Dick Richardson continued the Enclave's plans for achieving dominance within the wasteland, including the development of the advanced power armor, a project initiated by his father. Completed in October 2220, Dick immediately classified the research data and undesirable prototype results (including related accidents, explosions and deaths) to preserve Enclave morale.[Non-canon 3]

Under Dick Richardson's administration, the Enclave also began the development of FEV Curling-13. In July 2236, Enclave scouts discovered the ruins of the partially-destroyed Mariposa Military Base.[Non-canon 4] Excavation teams began working to uncover the ruins, finally yielding a pure sample of the FEV in 2238.[2] Although causing heavy causalities and the loss of resources, the sample allowed the Enclave to begin developing a biological agent to exterminate mutants worldwide.[3]

Under LTC Dr. Charles Curling, the Chemical Corps immediately began developing a viable toxin. By 2242, the project neared completion and FEV Curling-13 was almost ready for release. To Richardson, it was the dawn of a new era and humanity's last, best, hope.[4] He considered himself a patriot and servant of humanity, returning Earth to "real" humanity, wrestling it away from the hands of mutants.[5][6] Richardson was adamant in his disregard for non-Enclave humans, despite being based on deliberately obscured ideologies. In his eyes, humans not a part of the Enclave were certainly, undoubtedly subhuman.[7]

In 2242, Richardson is described as a thin, nervous older man who looks as worn and frayed as the suit he wears.[8] By the end of 2242, Richardson was killed by the Chosen One, hours before his dream could be achieved.[Non-canon 5] The nuclear detonation that followed erased all traces of the president from history, save for what remained in isolated Enclave databanks.[9]

Dick Richardson can be spoken to at great length to reveal numerous pieces of information with topics including the Forced Evolutionary Virus, the Project, Vice President Daniel Bird's condition, China and the Great War, the purpose of vaults, mutation and the fate of the Chosen One's kidnapped villagers.[10]

He also holds the presidential access keycard, which can only be obtained by killing him using one of the following options:

Dick Richardson appears only in Fallout 2 as a talking head. He is mentioned in Fallout 3 as well as in Fallout: New Vegas.[11]

"That's a shame. A conversation with a genuine mutant like you? It'd certainly paint me a picture of what life's like in that radioactive hell on the mainland."

"Hello, there. I'm President Richardson and I'm damn proud to meet you. Uh, Vault 13, I see. You've been doing your country an invaluable service."

"The only way for true humans, and democracy, to be safe is to cleanse the mutants from the globe. We humans will take back that which is rightfully ours."

"Never. Part of the president's job is to make the tough decisions. A lot of near-humans will sacrifice their lives for the return of humanity. Humans will prevail." 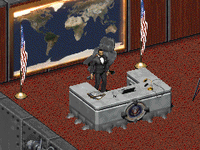 Richardson at his desk