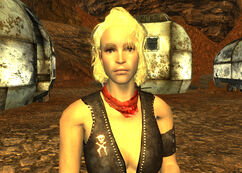 “Dammit, someone offed Motor-Runner! That guy was one of our biggest clients.”

Diane is a Great Khan living in the Red Rock Canyon in 2281.

Jack and Diane are advisers to Papa Khan. The pair run a drug-trafficking ring and supply the Great Khans with drugs. Jack makes the drugs, and Diane handles the business. According to Regis, Jack and Diane have been close since childhood, and it is implied that they have an emotional attachment to each other, or at least Jack does, since he becomes upset when told that the Legion would put Diane into slavery.

"Jack & Diane" is a song title by John "Cougar" Mellencamp about "two American kids doing the best they can," similar, in a way, to the pair of Great Khans named in homage to them.

Retrieved from "https://fallout.fandom.com/wiki/Diane_(Fallout:_New_Vegas)?oldid=3173528"
Community content is available under CC-BY-SA unless otherwise noted.