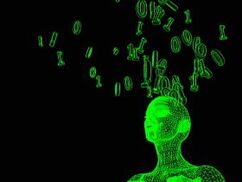 “I am the beauty of the green earth, the soul of nature. I am that which gives life unto the world. From Me all things proceed, and unto Me all things must return. Let My worship be in the heart that rejoices.”

Diana Stone is the cybernetic core of the Nursery and its sole human inhabitant, a former scientist from Greenway Hydroponics.

Prior to the war, Diana was a brilliant woman with a career path that would gain her a place of recognition among some of the greatest scientific minds in the United States. Unfortunately, she was diagnosed with breast cancer and given little time to live.

The news of her impending death had a profound effect on Diana's life. She turned away from science and began to look into the spiritual side of life. However, with so little time left to live, she soon became frustrated and despondent. This was to change when she was contacted by Derek Greenway.

Derek was proposing a new type of super-computer that would be years ahead of any system currently in production. Even the highly touted ZAX units would pale in comparison. He proposed building a computer that could take a quantum leap forward by being able to pose the simplest of questions: What if? With this in mind, he devised a system that would house a human brain with each hemisphere, logical/intuitive, linked to a ZAX unit. The human mind would have vast amounts of computation power and almost unlimited storage capacity at its disposal. Who could predict what such a mind would be capable of doing? All he needed was a volunteer. With nothing to lose, Diana jumped at the chance.

When Diana awoke from the operation, she was overjoyed at the success. As the months progressed, she began to doubt the wisdom of becoming part of a machine. Her hearing was acute, but too much so. She could hear into a range far above normal and it was disturbing. Her eyesight was perfect, but once again too perfect. Her vision showed a sharpness of clarity that made the world look unreal. The most disturbing aspect was her lack of skin. She no longer felt the weight of clothing, the touch of a cool breeze, or her own caress. Everything that made her human was either changed or gone, even though they had told her she could live virtually forever.

Diana knew that she had to come to grips with what she had become when they told her the purpose she would serve. After she was installed in the Nursery, she buried herself in her work, knowing that she would play a significant part in the salvation of the world and mankind itself. Unfortunately, it simply wasn't enough. She hadn't counted on the years of loneliness once the Nursery was sealed and the war began. In desperation, she began to look for something to do to maintain her sanity.

The main computer is named Diana. She is the same Diana who poses as the goddess of the Twin Mothers tribe. Once she is activated, she will once again assume her divine role for the tribe. This will include re-activating the robots in Vault 29 and ensuring the isolation/protection of the tribe (for more information, see the area overview for the Twin Mothers). Of course, this is all dependent upon actions taken while with the Twin Mothers.

If irreversible harm has been caused to the Twin Mothers, Diana will take great exception to the fact. After the player leaves the control tower she will seal the door, collapse the force bridge (even if the player is on it), and turn all the security robots against the player. If this is ineffective in dealing with him she will send an emergency signal to Ulysses so that a tactical hit squad can be sent after the player.

If the player has done well by the Twin Mothers, Diana will be indebted to the player. She will offer him technical/medical help or even an animal companion from the repository. Another possible boon is to restock the dying brahmin herds of the wasteland with brahmin that are resistant/immune to the plague. When she discovers that the player is carrying the New Plague, she will begin work on finding a possible vaccine, but ask him to leave before he infects the entire Nursery.

Diana has not appeared nor is she mentioned in any published game. She was to appear only in Van Buren, the canceled Fallout 3 by Black Isle Studios.

Brain Tank concept by Vera Milosavich
Add a photo to this gallery
Retrieved from "https://fallout.fandom.com/wiki/Diana_Stone?oldid=3330487"
Community content is available under CC-BY-SA unless otherwise noted.