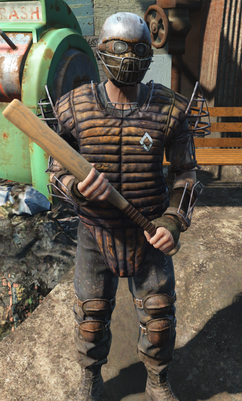 The DC security force was established by the residents of Diamond City sometime after it was founded in 2130, to enforce the law and protect the city's residents from local raider gangs, Super mutants, Gunners, and other dangers that inhabit the Commonwealth.

The security guards are armed with customized baseball bats and handmade automatic rifles. They don old pre-War baseball gear as armor, reminiscent of the pre-war days of baseball games that took place back in the heyday of the old baseball stadium the great green Jewel of the Commonwealth was built in.

Diamond City security officers are a good source of information about the game world as well as rumors leading to various side quests. A trait they share with the city guards from the Elder Scrolls series.

Retrieved from "https://fallout.fandom.com/wiki/Diamond_City_security_officer?oldid=3181679"
Community content is available under CC-BY-SA unless otherwise noted.