Diamond City Surplus is an unmarked location in the Diamond City market in 2287. It is owned and operated by Myrna (with the assistance of her robot Percy during the night shift) as a general store.

Myrna's house consists of a first-floor living area with Myrna's Novice-locked terminal, a pair of second-floor landings, and a third-floor sleeping area with an owned bed and the roof exit. 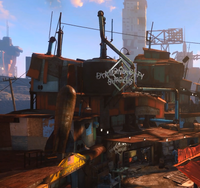