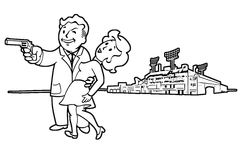 Diamond City Blues is a side quest in Fallout 4.

The quest starts in Diamond City where the Sole Survivor must help Paul Pembroke deal with Henry Cooke, the barkeeper of the Colonial Taphouse, and then intercept a drug deal in order to gain access to a chem lab.

However the bar scene plays out, one can either end up going to the chem deal solo, with Cooke, with Pembroke or with both.

Paul pulls a gun and things escalate quickly. Either calm him down with one of three easy Charisma checks or encourage him to attack Cooke. Taking the former ensures that both Pembroke and Cooke will be part of the upcoming chem deal ambush, as Cooke tells both Paul and the Sole Survivor directly about it. Taking the latter leads to Cooke's death. The Sole Survivor can get Cooke's note from his body in lieu of hearing about the chem deal directly from him. After reading the note, it is possible to either discuss the deal with Pembroke and enlist him as a backup, or to cut him out entirely by not mentioning it.

Option 2: Kill Paul in the bar

If the player character claims they're not with Paul, he will say "thanks for nothing" and one will not be able to persuade him when he draws his weapon. He and Cooke will open fire on one another, but neither will be hostile, presenting an opportunity to side with one by firing on the other. If one decides to help Cooke (or let him kill Pembroke, very likely to happen as he has a stronger weapon and is a higher level), the quest proceeds with Cooke telling the Sole Survivor about the deal. If Cooke dies, the quest reverts to option 1.

This requires passing a medium Charisma check during the initial conversation with Paul. There is a choice between a medium Charisma check and two easy Charisma checks to get Cooke to stop seeing Darcy. If successful, he will no longer allow her in the bar and will tell the Sole Survivor about the chem deal. If failed, or choosing the non-Charisma dialogue, he will turn hostile. Whether one kills Cooke and reads the note or keeps him alive, it is still possible to include Pembroke in the ambush by telling him about it when reporting back to him.

Afterward, Cooke will either be dead or leave Diamond City for good, thus he will no longer be available as a merchant. The quest continues, alone, to Marowski's chem lab.

Retrieved from "https://fallout.fandom.com/wiki/Diamond_City_Blues?oldid=3489409"
Community content is available under CC-BY-SA unless otherwise noted.