Diamond City or commonly referred among wastelanders as "The Great Green Jewel" is a fortified settlement in The Commonwealth. This settlement is based on the pre-War structure of Fenway Park, its distinctive "Green Monster" color visible on the reinforced walls. The city guards can be seen wearing baseball jerseys and catchers' gear, reflecting the location's former use.

Diamond City was founded in the 2130's in Fenway Park, and quickly established itself as a safe haven for settlers of the Commonwealth, thanks to what its residents affectionately referred to as "the Wall". Later decades saw Diamond City grow into the Commonwealth's largest and most prosperous community, as well as a degree of social stratification. Wealthier residents came to live in homes in the settlement's exclusive Upper Stands, overlooking the Lower Field where everyone else strived to make a living.

In 2180, the Commonwealth Minutemen defended the city from an attacking group of Super mutants. This caused the faction's eventual rise to fame.

An incident known as the "Broken Mask" occurred in 2229, when a man calling himself Mr. Carter arrived. At first, the people of the city warmed to Mr. Carter, but while he was drinking at the bar that occupied the center of Diamond City's marketplace, he went berserk and killed several residents. When security personnel killed Mr. Carter, they discovered he was a Synth created by the Institute. From that moment on, the people of Diamond City lived in fear that they would be covertly replaced by Synths, though such talk was discouraged and ridiculed by the city's leadership. Even so, a number of people began inexplicably disappearing from the city over the following years, a disturbing trend that no one wished to acknowledge.

In 2272, the protectron Takahashi took up residence in the marketplace's old bar and opened Power Noodles, a restaurant that became a staple of Diamond City culture.

By 2282, Diamond City's mayor was McDonough. In that year, he controversially decreed the expulsion of all ghouls from the city. Some ghouls relocated to Goodneighbor, and continued to bear a grudge against both Mayor McDonough and the inhabitants of Diamond City in general, who did little to reverse the decree.

By 2287, some residents came to believe McDonough had been replaced by a Synth, a suspicion exacerbated by Piper, her sister Nat, and their newspaper Publick Occurrences.

When Piper reaches idolized status with the Sole Survivor, she explains that when she first moved to Diamond City with Nat, the Great Green Wall was broken, and patched with a solitary bookcase. This drove her to create Publick Occurrences to address the issues of Diamond City.

The marketplace with Christmas style decor 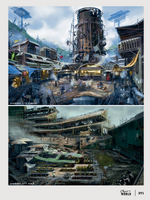 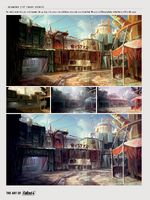 Add an image to this gallery
Retrieved from "https://fallout.fandom.com/wiki/Diamond_City?oldid=2510722"
Community content is available under CC-BY-SA unless otherwise noted.