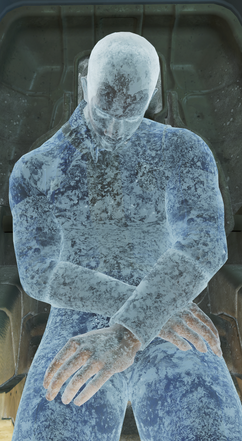 Mr. DiPietro is a deceased resident of Vault 111.

DiPietro managed to secure a place in Vault 111 just before the bombs fell and became an occupant of one of the stasis pods. He died though from asphyxiation inside his pod, like most of the other vault dwellers. He is found next to Mrs. Whitfield and Mr. Whitfield.

The monitor places him in stasis pod B1. On the floor in front of his pod, C9 is written in white paint. There is similar confusion for the rest of the pod occupants in this section. The pods in the other sections with the Sole Survivor (C1-C8) have been assigned correctly.[1]

Mr. DiPietro appears only in Fallout 4.

Retrieved from "https://fallout.fandom.com/wiki/DiPietro?oldid=3250886"
Community content is available under CC-BY-SA unless otherwise noted.