Leader and co-founder of Acadia

Helps Allies
“You've entered a place of clarity. Understanding. Peace. While you're here in Acadia, synth-kind welcomes you, as long as you welcome us.”— DiMA, welcoming the Sole Survivor to Acadia

DiMA is a modified synth on the Island in 2287. He is one of the founders[1] and leader of Acadia.

DiMA, alongside Nick Valentine, is one of two early prototypes created by the Institute to test if synths could handle independent thinking and judgement.[2] While DiMA was allowed to freely develop his own personality through experience, Nick was outfitted with alternating, pre-existing human personalities.[3] The two formed a close sibling relationship while in the Institute together and DiMA, not being able to bear seeing his brother put through such cruel experiments, decided to run away with Nick and the duo eventually managed to escape.[4] However, disoriented by the experiments done to him, Nick did not recognize DiMA after escaping. Believing himself to be the human Nick Valentine, Nick attacked DiMA, forcing DiMA to knock him out and then abandon him.[5]

Afterwards, DiMA traveled to Far Harbor to hide from the Institute, though without a programmed objective. He sat in a cave doing nothing for nearly a year before it occurred to him that he could define his own path in life.[6] He then went on to live in an old nuclear-armed submarine base that was eventually discovered by the Children of Atom.[7] DiMA befriended their leader, Confessor Martin, and eventually gave them the base as their home.[8]

Alongside Faraday, a synth scientist that acts as his assistant, and Chase, an ex-courser that DiMA was able to convince to defect from the Institute, DiMA went on to found Acadia with the intention of creating a safe place for synths to live freely and not have to hide their nature.[9] From there, DiMA was able to develop fog condensers to protect the residents of Far Harbor from the Fog, which consequently angered the Children, as the Fog is sacred to them.[10]

With tensions high between the Children, Acadia, and Far Harbor, DiMA, desperate for peace and safety for his own people, created contingency plans in the event that either group endangered Acadia.[11] For the Children, it was acquiring the key to the nuclear missile in the Nucleus, and for Far Harbor, it was acquiring the shut down codes for the town's wind farm and only power source. Then, in his desperation, DiMA chose to kill Captain Avery and secretly replace her with a synth as to have a "moderate voice" to be an example of how synths and humans could live side by side.[12] DiMA was so sickened by his own actions that he chose to remove these memories and, as a sign of good faith, put them in the Nucleus' computers for the Children to safeguard.[13]

Sometime later, DiMA and Nick are reunited when Nick and the Sole Survivor travel to Far Harbor looking for Kasumi Nakano. While DiMA expresses surprise and excitement to see Nick again, Nick is far more reluctant, not having any memories of DiMA due to their last encounter being over a hundred years prior—memories DiMA has been able to maintain through his many modifications. However, if the Sole Survivor encourages Nick to accept DiMA as his brother after finding the holotape of their fight, Nick will apologize to DiMA and the two will occasionally greet each other or chat when entering Acadia.

Based on the player character's actions, DiMA can become an ally or an enemy.

DiMA appears only in the Fallout 4 add-on Far Harbor.

DiMA in the Far Harbor trailer 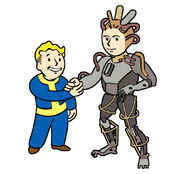 DiMA in the Acadia quest icon 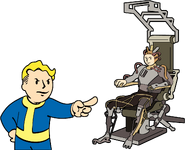 DiMA in The Way Life Should Be quest icon