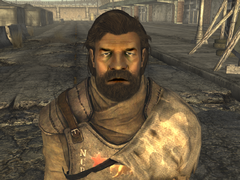 Dhatri without his beret

“Well, well, well. Driver Nephi. Nothing to say, you son of a bitch? No tips on my golf swing?”

Major Dhatri is a New California Republic officer stationed at Camp McCarran in 2281, and he wants someone to take care of some Fiends for him. He is typically found outside the terminal right by the tents.

A veteran of the New California Republic Army, Dhatri holds the rank of major. He is the officer in charge of the 1st Reconnaissance Battalion and the adjutant of Colonel Hsu, but currently has one thing on his mind: the bounty hunt for leaders of the Fiends, Violet, Cook Cook and Driver Nephi. Due to the considerable difficulty, the NCR has experienced in the recent months at finishing off the Fiends, Dhatri decided to place bounties on the heads of these Fiend leaders. He shares a particular kind of hate for the three, as they are responsible for the deaths of over twenty NCR troopers serving under his command.[2] He manages the bounties due to patriotism - otherwise, no amount of money would convince him to pick a fight with those Fiends.[3]

Horrors of war are not new to the major; he was a captain during the Bitter Springs Massacre in 2278 and helped salvage the operation when it turned out that 1st Recon opened fire on unarmed civilians. By the time Dhatri or anyone else realized the people trying to escape were overwhelmingly Khan non-combatants- women, children, elderly, wounded and the sick- the situation was already spiraling out of control. He was forced to act, as Major Gilles suffered a nervous breakdown and was unable to command. Dhatri was promoted to major for his efforts.[4] For his efforts, Dhatri was promoted to major while Gilles was busted back down to captain and relieved of command of 1st Recon. Dhatri's was then moved to Camp McCarran, and given command of the 1st Reconnaissance Battalion that he continues to hold in 2281.

After Bitter Springs, he adopted and raised Sgt. Bitter-Root, a Great Khan orphan. As a father, he is particularly proud of his son's membership in the Alpha Team of 1st Recon, under Lt. Gorobets. He has accepted the fact that he might, one day, send his child to death. His only consolation is that he will at least have the chance to see him one last time as his CO.[5][6]

Though Dhatri despises both the Fiends and holds no love for the Great Khans, he has considerably better feelings for the latter, due to his remorse for the NCR Army's actions at Bitter Springs. The Fiends, on the other hand, Dhatri views as nothing more than animals to be hunted down and destroyed.

Three-Card Bounty: Dhatri wants bounty hunters to kill three Fiend leaders and take their heads to him, for which he will pay a handsome reward, but he's very particular about the means of their deaths - no headshots or decapitations which might disfigure the gruesome trophies.[7]

Retrieved from "https://fallout.fandom.com/wiki/Dhatri?oldid=3440759"
Community content is available under CC-BY-SA unless otherwise noted.