Devil's Graveyard is the second mission in Fallout Tactics demo.

Mission starts in the point marked with the green circle on map. On this stage of the game you have to split your units into three groups to complete the mission successfully. First of all, set the aggressive mode when chances to hit are 33% for all your characters. Send the soldier who has a skill in grenades and thrown weapons to the north, to the fence. Set the Sneak mode on and order your character to crouch.

Move along the fence up to the small green puddle of radioactive wastes. Put the soldier wielding the hunting rifle to the central fire line. As soon as he engages the enemies covered behind the barricades, send the unit with grenades to outflank them from the left. To the right of your main sniper there is a pair of nasty raiders. You need to deal with them using your third group of characters equipped with MP5. Your grenade thrower sent to the left flank is lethal for your opponents. The enemies wounded by your sniper will be eliminated with a single grenade thrown by their feet. Now put your sniper to the position previously occupied by these opponents. From there you can easily outflank the enemy from the right side.

Next step is to kill two enemies who entrenched themselves behind the shields by the entrance to the enemy base. Use your sniper to wound each of them. Don't leave your character on the line of fire, order him to step back after each shot, or hide behind the sacks. Few wounds taken - and AI will decide to retreat. Use this decision to put your third group to the right flank.

The entrance to the enemy base is patrolled by one opponent. You have a chance to use your sapper there. Spend some time watching the way enemy sentry is moving. Find a good opportunity to sneak to the entrance and set a mine there. Then hide behind the corner and wait for the firework.

Now make your way to a small half-ruined building by the western map edge. The building is overcrowded by cockroaches. All the battle tactics is to prevent them from touching you. Use two units to kill cockroaches from two sides. Note the closets in this room. Starting from there, you will sometimes find such closets containing many useful things.

The exit from the cockroach house is under the crossfire of two snipers. They are very dangerous - their fire is precise, and there are no covers nearby. It is better to select two units equipped with long range weapons and rifles and run across the dangerous zone. Make sure they have all available stimpaks and other medicine, as well as Ripper at hand. They will have no support from their colleagues for a long time.

The run brings you to the training grounds. Now it is time for hand to hand combat and shotguns. First three enemies nearby are easy targets for your Ripper and shotgun. Then peep out from behind the corner to destroy two more enemies on the second site. Don't hurry to run to the closet you see on the neighboring site. In the guard house on the south there is one more enemy hiding. It is easy to eliminate him. Emerge from behind the corner and wound him to make him retreat further into the building. Then kill him from a long distance or with burst fire. Make sure you checked the pockets of all bodies. One of them will give you the key. You'll need all the keys to open the locked doors. If you haven't found the key, you can try to lockpick it.

Now you need to deal with snipers (map marker 3). Having left the training grounds, bypass the eastern building in running or crouch mode. Don't try to engage the enemy through the windows - you have to destroy two snipers now, because they prevent you from sending the reinforcements in. Your task is to get to the door to gain the rear of the enemy. There you will need Lock picks. The snipers are to be eliminated by simple peeping out from behind the corner and using single shots.

It is time to use the single soldier only. Use the character wielding the hunting rifle in crouch mode. Move along the fence from dead snipers to open the entrance of the building marked with 5 on your map. Don't show yourself beyond the fence edge, or you'll be caught in the crossfire by bunker snipers. Destroy the entrance guards and return to the locked door in the western part of the building. Here you can kill the covered opponent through the window. Use the key or lockpicks to get inside. Beware of one more hidden enemy in the eastern part of the building. Deal with him, and the building is secured. Check all the caches and prepare your units equipped with SMG and shotguns.

Use the key to get inside the building marked with 6 in the map. You'll need three soldiers there, two of them with SMG and shotguns. First, kill the opponent right by the entrance. Then split your team. Send a hunting rifle wielding soldier to the left. He will destroy the guards in the central part of the building. Two others will clear up the approaches to the staircase leading to the second floor. Now move your character equipped with a long range weapon to the second floor and kill the entrenched enemies in the room by the eastern wall. Take the key from the body in the central room - you will need it soon.

You have successfully passed one of the map zones marked with a grey circle. There are some bad guys entrenched in a well-defended bunker. It is hard to deal with them. There is only one way - outflank the bunker. You can do it by approaching them through the south exit from the building marked with 6. You'll need the lock picks to open the door to the bunker. Each sniper body will give you a hunting rifle and 200 ammunition to each of them.

Now go to the northern exit from the building marked with 6. You'll meet the enemy by this exit. You can easily defeat them with a hunting rifle. You'll find the job for your sapper there as well. The area is heavily mined. Use the break to turn the 6th building from the eastern side. Use the key to open the room and grab everything you find.

In the meanwhile your first group will have to kill two opponents in the 7th point. When the 7th zone is secured, wait for your second group to destroy two raiders by the gates at the point number 8. Order your sapper to disarm all the mines. Now open the gate at the point number 7 with the local valve. Before opening the gate, place your soldier with some drugs in his pockets nearby. If you calculated the turn passing sequence, the unit by the gate will have the next turn. The bunker snipers will fire at him right away - don't engage them. Try to pass the gate and cover behind the pillar in the courtyard, by the eastern wall. Theoretically, you can do it without loosing too much health. It is better to prepare SMG and sneak into the small house where the valve controlling the gates from the south side is located. A pair of raiders guards the valve, and you can easily eliminate them with burst fire.

Use your second group to secure the bunker. Lockpick the door and kill all the snipers one by one, carefully opening the door, making a shot and closing the door by the next character, turn by turn.

Sneak into the camp

From here, you can use three units only - you don't really need the others now. All of them should have enough drugs, ammunition, melee weapons, shotguns and hunting rifles, and lock picks. To the west of the bunker, you'll find the first staircase leading to the balcony surrounding the building perimeter. Send one of your soldiers there. Act simultaneously or in turns. The task of character on the top is to kill the balcony guards. It is not really necessary to kill them. The tactics is quite simple - sneak to the enemy until chances to hit are 33%, and don't care about your health too much.

More important task is for two soldiers left below. Sneak to the 9th building and kill the enemy in the passage. Then disarm the alarm system. You'll find three sleeping raiders in the next room. With little hurry, you can kill them with knives or some other melee weapons, without even waking them.

In the courtyard you'll find yourself standing in front of the 10th building with two doors in it. You can now go west and meet Cletus. He's a herder and don't carry anything. But if you'll kill him, brahmins will go mad and try to attack you.

It is better to enter the building 10 through the western door. You need to kill two opponents by the entrance. Another enemy is hiding behind the corner. Open the door to the next room and face Psycho. He's wearing a red armor and has some strange pink appearance as a whole. It is a long process to kill him, and you'd better try to avoid his fire. Having killed him, you'll get FN-FAL with 200 ammunition.

Go to the courtyard and kill three guards in the opposite building with three bursts. One is covered on the first floor, and two others - on the second. Open the door and carefully, emerging from behind the corner, kill five more guards.The final target is the main villain, Gargantua. As soon as his dead body fall on the ground, you'll see the successful mission completion notification. 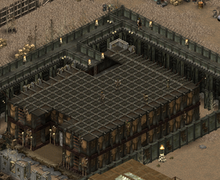 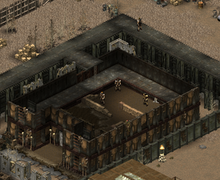 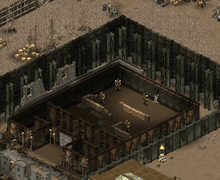