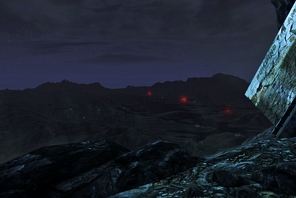 During the NCR-Enclave War, the New California Republic sacked the previously heavily defended Navarro outpost, inflicting a decisive blow to the remaining Enclave presence in California, despite suffering horrendous casualties. The advanced technology left behind by the Enclave was recovered by the NCR, but it was too advanced to understand completely. However, it was noticed that the symbols found upon the technology (American flag, silo stencils, etc.) were identical to those that had been recovered at Hopeville and Ashton, and so a tie between the two was suspected. The NCR hired a Courier to take the item from Navarro to what would become the Divide.

The Courier carried the package from Navarro by order of the NCR, containing what was an activated ICBM detonator to the Divide, a short time before the NCR and the Legion jumped at each other's throats. When this device was close enough, it remote linked with the ICBM computers, sending a signal to the dormant nuclear missiles lying in the silos beneath the ground. They then began detonating one after another, splitting the earth, cracking and twisting the landscape, causing massive earthquakes. Entire companies of NCR soldiers in the area were trapped together with their Legion foes. The disaster created the newly named Divide as it exists now: a wind-beaten maze of twisting canyons, skin-flaying dust storms, and horrific abominations.

The Divide twisted the surviving NCR and Legion. As the winds flayed their skin and radiation ghoulified them, they became the marked men; skinless horrors fueled by hatred and rage for everything around them. Outside the Divide, the disaster became a blessing in disguise for the Legion: cutting off NCR supply lines along Death Valley Road, it granted Caesar's Legion crucial and pivotal time to recover after their loss in the First Battle of Hoover Dam. However, it also gave birth to the greatest danger to the post-War civilization of the American Southwest: Ulysses. The Divide disaster both traumatized and inspired him as he learned the impact a single person, the Courier, can have on history.

The destruction of Hopeville and Ashton is mentioned in the Fallout: New Vegas add-on Lonesome Road.

Retrieved from "https://fallout.fandom.com/wiki/Destruction_of_Hopeville_and_Ashton?oldid=3259086"
Community content is available under CC-BY-SA unless otherwise noted.