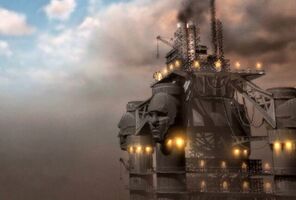 The destruction of Control Station ENCLAVE was the nuclear devastation of the Enclave's oil rig on the Pacific Ocean in the year 2242.

The Chosen One boarded the PMV Valdez after recovering fuel sources to power the tanker, and rode the ship across the Pacific and docked in the oil rig. After the Enclave invaded Arroyo and Vault 13, the inhabitants of the two locations were imprisoned on the oil rig.

After sneaking through the entrance sector of the rig, the Chosen One spoke to members of his tribe in their cells. His mother informed him that it was possible to overload the facility's nuclear reactor, causing a meltdown. The Chosen One went through the presidential offices, and could have confronted President Dick Richardson. After reaching the rig's reactor, the Chosen One would have found a way to destroy or shut down the reactor (shutting down the reactor too quickly will cause a meltdown).

Afterwards, the Chosen One went for the rig's entrance to leave before the rig exploded. However, he was faced by Frank Horrigan and the Enclave Control Company, led by Granite. The Chosen One convinced Granite and his team to abandon the Secret Service and join him, and fight by his side against Horrigan.[3] After defeating Horrigan, the Chosen One and the ECC escaped the oil rig in time. Upon their departure, the rig was obliterated by the reactor, releasing a ginormous megaton-sized mushroom cloud.

The Enclave's plan to poison the Earth's jetstreams with a customized variant of the Forced Evolutionary Virus, codenamed Curling-13, and killing off the 'mutants', was abolished. As a result, the Enclave would suffer substantial setbacks to its agenda and significant reductions to its manpower with the destruction of their oil rig headquarters, and was thrown into temporary disarray due to the sudden lack of a hierarchical leadership.

All Enclave personnel that managed to flee the rig during the Chosen One's infiltration in Vertibirds would ultimately fall back to various locales throughout the United States. The known main force that was still stationed at Camp Navarro eventually headed for the Capital Wasteland and/or Chicago under the command of Autumn Senior, by order of one of President Richardson's political advisers: the newly self-proclaimed President, John Henry Eden.

In time to come, some of the Enclave remnants attempted to integrate themselves peacefully into the NCR, concealing their checkered pasts. This met with varying degrees of success, but it appears that a fair number managed to live out their lives in relative obscurity, including the parents of Arcade Gannon. The full story behind the destruction of the oil rig, however, seems to have been lost, and the Chosen One has evidently never bothered to give a personal account to any NCR historian or Brotherhood archivist for record-keeping purposes. As a result, this chapter of history is not common knowledge in the NCR, and the remnants of the Enclave are themselves unclear about the exact details of their day of defeat. Former officer Judah Kreger attributes the oil rig's destruction to "internal sabotage" of some sort, in conversation with the Courier.[4]

The destruction of Control Station ENCLAVE appears only in Fallout 2, and is mentioned in Fallout: New Vegas and the Fallout Bible.

Retrieved from "https://fallout.fandom.com/wiki/Destruction_of_Control_Station_ENCLAVE?oldid=3151836"
Community content is available under CC-BY-SA unless otherwise noted.