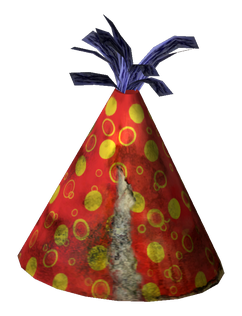 The destroyed party hat is a piece of headwear in Fallout: New Vegas.

It looks the same as a normal party hat, except that it is a little bit smaller, has lost its color, and it is covered in dirt and grime.

10 of these can be found on a shelf in the REPCONN test site building, behind a Very Easy locked door where Jason Bright and the Bright Followers are encountered.

Retrieved from "https://fallout.fandom.com/wiki/Destroyed_party_hat?oldid=2907046"
Community content is available under CC-BY-SA unless otherwise noted.