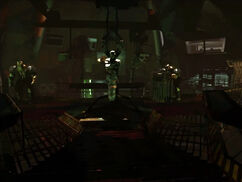 The vat teams prepare their next victim... 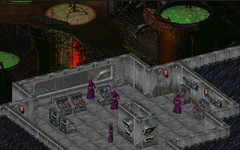 “Well, I'm quite impressed. My spies told me you were resourceful, but they seemed to have underestimated your talents. Guards, capture him/her!”— The Lieutenant

Destroy the source of the Mutants is a main quest in Fallout.

If the Vault Dweller enters Lost Hills and speaks to the elder of the Brotherhood located on level 4, or to Head Paladin Rhombus on level 1, they will both tell them that there are rumors of an army massing to the north. The Vault Dweller may also find a file on a military base to the north in the Los Angeles Vault, thus sparing them the trouble of searching. This will, however, require some skill with Science in order to break the files' encryption.

The military base is located a good number of squares to the northwest of the map, far from anywhere else in the wasteland. The desert surrounding it is patrolled by Unity kill-teams, equipped with miniguns, laser rifles, and rocket launchers. They may also have a few centaurs or floaters with them.

Once the Vault Dweller finally finds the massive installation, they need to get inside. There are four mutants outside the base, three with laser rifles and one with a rocket launcher. The Vault Dweller can use a radio to draw the launcher and two of the riflemen away from the base and earn 1500 XP for tricking them. The mutant who doesn't leave holds a tape that contains the door code to the base's entrance. Alternatively, Katja can also pick the lock. Proceed to enter the main base.

Once inside, the Vault Dweller will most likely trigger the alarm if they are not wearing robes and mutants will open fire on sight. However, if the alarm is not triggered, one has the option to talk to the first mutant guard, who will bring them to the Lieutenant. There are four which will come running: two with miniguns, two with rocket launchers. Defeat them, then check out the forcefields. The yellow ones can be shut down for a minute by using Repair on their emitters (use Repair without tools, see notes below), while the red ones can be run through at the cost of health. Both force fields can be destroyed by dropping an activated explosive close to them in the nearest hexagon.

There are two computer consoles behind a few yellow fields that can be hacked to take control of the base's security systems. The Vault Dweller can alter the robots' programming on the console near the elevator, and set their radio's frequency to match the emitters and shut them down remotely in the far southeastern end of the level. Tampering with the robots will make them friendly, and changing the pest control to "large pests" will kill three mutants on the second level.

While the second level holds plenty of loot, the third level is where the Vault Dweller needs to go. They'll come across a big, suspiciously empty room. If their Traps skill is high enough, they will find all sorts of land mines and tripwires strewn around the floor. The Vault Dweller needs to get to the yellow field at the end of the hall, and blast the two mutants there: Krupper and Flip.

After taking another elevator down to level four, heading to the left will produce an encounter with Vat Team 9, a crack squad of mutant soldiers. The right leads to the vats, which is also where the Lieutenant and Van Hagan of the Children are located.

The encounter with the Lieutenant is optional. The vats control room is down the hallway past Vat Team 9's quarters, the room with all the COC techies. Use the terminal in the center of the overlook room to set the base to self-destruct. If the Vault Dweller's Science isn't high enough to decrypt the terminal, they should pick the second one from the bottom, which sets the timer to the longest possible duration and removes yellow force fields. Alternatively, a keycard from one of the techies can be used to automatically decrypt the codes.

If the Vault Dweller wears robes when they walk into the outer military base map, they can trick the mutants into letting them pass, then pick the locked door without triggering the alarm. That will let them sneak down to the control room and destruct the installation without conflict. Another approach is using a Stealth Boy and sneaking through, but keep in mind a high Sneak skill will be required as one cannot walk too close to the mutants or they will be detected. The Lieutenant, though, can see through the Vault Dweller's disguise if talked to.

If one does things in a particular order when they set the self-destruct, the timer will go from whatever time set to zero immediately, making the quest impossible to complete. [verified]

Retrieved from "https://fallout.fandom.com/wiki/Destroy_the_source_of_the_Mutants?oldid=3291616"
Community content is available under CC-BY-SA unless otherwise noted.