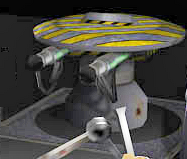 “Destroy the automated gun turrets guarding the vault entrance. HINT: You can destroy the turrets directly, or destroy nearby machinery to de-activate them.”— In-game description

Destroy Robot Turrets is a quest in Fallout: Brotherhood of Steel. It is located in the Vault-Tec Warehouse sub-basement.

This section is transcluded from Turret robot. To change it, please edit the transcluded page.

There are a total of eight of them guarding the entrance to the Secret Vault, and special power sources are used to maintain them in working condition. These sources can be considered the system's weak spot. There are more of these systems inside the Vault.

When the Initiate of the Brotherhood of Steel makes his way to the Vault's entrance, some dumb super mutants accidentally activate the system. However, the Initiate manages to destroy all eight turret Robots and their power sources, unlocking the doors. Later, he battled some more robot turrets guarding the Vault's facilities and laboratories. On few occasions, the Initiate could even take control of a robot turret to kill some super mutants. 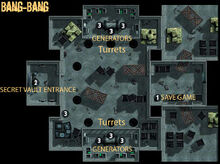 Add a photo to this gallery
Retrieved from "https://fallout.fandom.com/wiki/Destroy_Robot_Turrets?oldid=2199439"
Community content is available under CC-BY-SA unless otherwise noted.