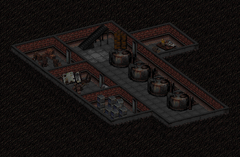 The Desperado is a New Reno casino, and home to the Mordino family. It is the focal point for the New Reno drug industry, primarily jet.

The casino itself is lacking the glamour of the outer facade. The interior is dirty and poorly lit. The slot machines are in disrepair. The upper level of the casino is broken up into a series of rooms, with Big Jesus' room at the center. Most of the rooms are leased out to the guards. The basement has a large boiler, several rats, and a ne'er-do-well named Pretty Boy Lloyd. In addition, the basement contains a room filled with crates and an oxygen tank filled with toxic gas.

The Desperado appears in Fallout 2 and is mentioned in Fallout Bible.