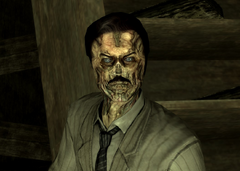 Desmond without his glasses

“I've been around for a long goddamn time.”

Desmond Lockheart is a pre-War ghoul living in Calvert Mansion in 2277.

Before the bombs dropped, Desmond was a player in British intelligence at the highest levels. Desmond's motives and obsessions have been scarcely affected by the apocalyptic devastation of the planet. Desmond and those he would consider his peers knew for some time that the Great War was inevitable.

Facing the nuclear holocaust, global leaders and members of the intelligence community made their personal bids for survival in the new world. F.E.V., cryogenic stasis, AI consciousness, even - in Desmond's case - controlled exposure to normally lethal doses of radiation were among the wildly risky and experimental techniques pursued in the name of survival in a world without modern infrastructure. Old rivalries and vendettas were not forgotten in the ashes of nuclear winter. Those who managed to survive quickly set about doing what the bombs had not: wiping out any remnants of the Old World that may be a threat to personal and political agendas. Now, even so long after they should all have died naturally, these scattered figures seek power and jealously guard their secrets. Desmond's mission has long since ceased to be political or ideological. He knew - as experience has proven tenfold - that as long as any of his colleagues lived, he would be hunted. His purpose is simple: kill or be killed.[2]

He was responsible for ridding Calvert of a body, and due to this, the two have a raging vendetta against each other that can only be ultimately resolved by one of their deaths.

Desmond Lockheart appears only in the Fallout 3 add-on Point Lookout.

Desmond in the Calvert Mansion