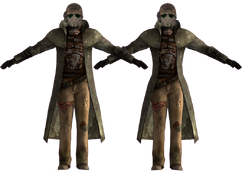 Armor with a desert camouflage pattern, military helmet, gas mask, olive green duster, and a pair of khaki pants. Data of the original owner, R.B. Vickers, is printed on the collar and includes rank, name, service branch, and blood type. On the back of the helmet are the names of two locations, Nanjing and Shanghai, and abbreviations of months for each place as well as tally marks. Nanjing has JUN, JUL, AUG, and an SE which is crossed out. Shanghai has SEP, OCT, NOV, DEC, JAN, FEB, MAR, APL, and MAY. The words "FORGIVE ME MAMA" are written across the front of the helmet. Randall Clark utilized it after the war, storing it in Stone Bones cave. 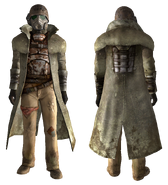 The back of the helmet, with places it's been 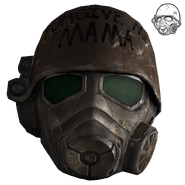 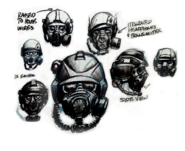 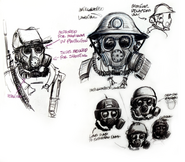