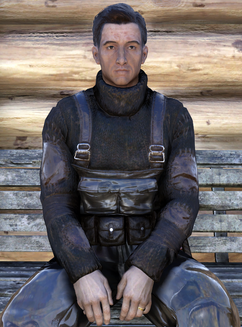 Derrick Taylor is a member of the Settlers residing in Foundation in 2103.

Taylor is from Pittsburgh, directly north of Appalachia. He has little to say of Pittsburgh other than that Appalachia is leagues above the former city, and while he doesn't talk about it, he was a slave in the city when he met his future wife Elsie Taylor, who was a Pitt raider, and the pair fled the city after having a child.[1] After leaving Pittsburgh, he met up with the Settlers sometime before, together with his wife and son Davie Taylor, which they are very protective of as he is one of the first of the post-Great War generation.

Derrick Taylor appears only in Fallout 76, introduced in the Wastelanders update.

Derrick is erroneously referred to as "Derrick Hale" in the Fallout 76 credits. This is because Derrick's voice actor, Neil Kaplan, also voiced Emerson Hale.

Retrieved from "https://fallout.fandom.com/wiki/Derrick_Taylor?oldid=3405543"
Community content is available under CC-BY-SA unless otherwise noted.