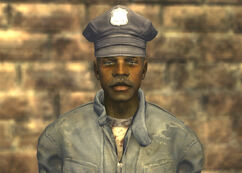 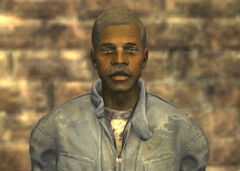 Dermot without his police hat

Dermot is a slaver living in Westside in 2281. Together with his partner Saint James, they have been kidnapping, murdering, and selling women and children into sexual slavery to the Fiends.

A particularly rough and nasty person, Dermot puts on the persona of a hardworking and honorable prospector working salvage around New Vegas that likes to just relax on his off days.[1] Both Dermot and his partner, Saint James, rent rooms at the Casa Madrid Apartments in Westside, but Dermot does not engage the services of any of the prostitutes there, unlike his partner.[2] However, the reality of the situation is that Dermot and Saint James are prospectors turned slavers who have been kidnapping and enslaving refugees around the Aerotech Office Park area for little over a year[3] and selling them to the Fiends for a profit.

Dermot has a particular mind for keeping his business profits straight and always updates a ledger on the businesses he's done before with prospecting and now (unwisely) for slaves. Along with documenting profits, Dermot also writes notes to himself about how to improve his craft, how to keep Saint James from getting to the children, and any other situations of note.[4]

On one particular case, Dermot and James had stolen a teddy bear from a little girl they kidnapped. Dermot bribed James with the bear as a means to keep his hands off the kids, as the Fiends want their goods fresh to sell for a higher price. The loss of that particular girl, however, has made Captain Parker concerned about the people that leave the Aerotech Office Park camp.[5]

Dermot has two unique items, having the only police hat and RobCo jumpsuit in Fallout: New Vegas.

Retrieved from "https://fallout.fandom.com/wiki/Dermot?oldid=3315679"
Community content is available under CC-BY-SA unless otherwise noted.