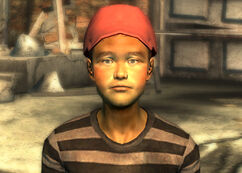 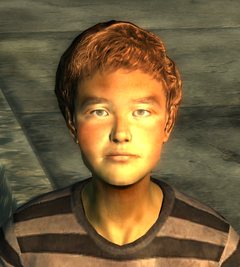 Derek Pacion is a young resident of Canterbury Commons in 2277. He wears a red kid's baseball cap and seems to have an obsession with superheroes.

Derek is a 15-year-old boy who was raised in Canterbury Commons by Louis Pacion and Daisy Roe, a pair of traders who met and settled down. When they were killed in separate raider attacks on their caravans (six years ago for Daisy and three years ago for Louis), Derek was left to his "Uncle Roe," the town mayor. Since then, Derek's been a quiet and morose child. He works around town as a general assistant, but he doesn't really say much unless it's necessary. He harbors a secret crush on Machete but doesn't have the courage to approach her. He devotes much of his free time to drawing posters of the Mechanist and reading Hubris Comics.[1]

Derek is Ernest Roe's nephew. Derek often travels to the Republic of Dave to see his friend Ralph, Dave's son.

Derek also knew Scott Wollinski before Scott became the Mechanist. Derek is responsible for escalating the conflict in Canterbury Commons to dangerous levels; an optional conversation topic reveals that Derek convinced Scott to become a superhero and fight the AntAgonizer after she destroyed a robot.

Derek Pacion appears only in Fallout 3.

The Drawing of the Mechanist, which influenced Isabel Cruz's alter-ego in Fallout 4 is a likely connection to Derek Pacion. The poster includes the initials "DP" in the top left corner.

Retrieved from "https://fallout.fandom.com/wiki/Derek_Pacion?oldid=3245852"
Community content is available under CC-BY-SA unless otherwise noted.