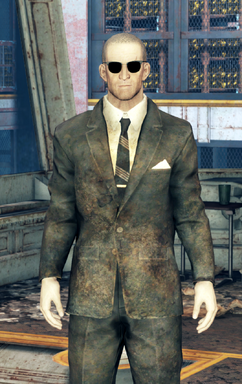 Derek "AC" Garrison is the leader of the Secret Service in Appalachia in 2103.

Derek is the agent in charge of the operations within Vault 79 (giving him his nickname "AC"). He was put in charge thanks to Secret Service regulations.[1] His job is to try to create a new currency backed in gold. According to him, he and his fellow Secret Service members will bring back civilization to the East Coast.[2]

Derek survived a coup attempt by Shorty and spent the time afterward just listening to the radio.[3] When Mercedes Stern was pregnant with Maggie, he threw a baby shower for her.[4] However, now he faces a new crisis. The vault's reactor has malfunctioned, turning many of his former subordinates into feral ghouls who in turn killed more agents. He and several others managed to lock themselves into a secure, though small and poorly supplied, part of the vault where they await an unlikely rescue.[5]

Derek Garrison appears only in Fallout 76, introduced in the Wastelanders update.

Retrieved from "https://fallout.fandom.com/wiki/Derek_Garrison?oldid=3371655"
Community content is available under CC-BY-SA unless otherwise noted.