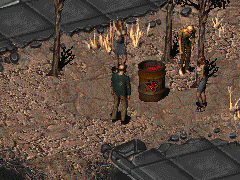 Get book from Derek

Derek is an inhabitant of the Den in 2241. He is normally located in the Den East Side, just outside of Mom's Diner.

Derek is an agile man[1] with a serious chem addiction. He is a self-proclaimed "grandmaster cook", and as such wishes that he had a kitchen of his own, but Becky won't hire him because of his instability due to his addictions. Derek is clearly insane and talks mostly incomprehensible nonsense. He borrowed the book "The Lavender Flower" from Becky, but didn't like it because it contained "too much kissing" and he threw it away somewhere in the east side of the Den.

Derek appears only in Fallout 2.

Retrieved from "https://fallout.fandom.com/wiki/Derek_(Fallout_2)?oldid=3405939"
Community content is available under CC-BY-SA unless otherwise noted.