DeputyWeld
“Have yourself a nice visit, partner.”

Deputy Weld is a Protectron that guards the gate of Megaton in 2277.

Previously purchased by Sheriff Simms from Tinker Joe,[Non-canon 1] Deputy Weld is a RobCo Industries Protectron on guard duty at Megaton's front gate, where he greets travelers with some platitudes in a '50s tone.[Non-canon 2]

Due to the Lone Wanderer's unawareness of their origin, Colin Moriarty refers to them as having a "better programming than our own Deputy Weld."[1]

Deputy Weld appears only in Fallout 3.

In Broken Steel, if Deputy Weld is killed in the firefight between Megaton settlers and the Brotherhood of Steel soldiers accompanying the water caravan, he may later be found wandering the wastes in the vicinity of Megaton, still saying "Welcome to Megaton." [verified] 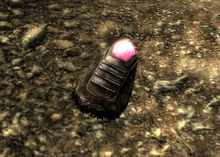 Remains of Weld at the Megaton ruins