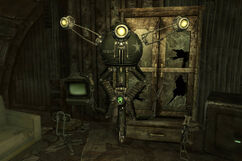 “Pansy! Take a shot of vitamin M and keep fighting!”

Deputy Steel is a Mister Gutsy that guards Megaton's armory in 2277.

This General Atomics Mister Gutsy has been programmed to serve as an assistant to Sheriff Simms.

Deputy Steel is owned by Megaton as a whole but entrusted to Lucas Simms and apparently maintained by both Lucas and Harden Simms.

Deputy Steel appears only in Fallout 3.

Sometimes, when one attacks him he says "What is your major malfunction, maggot?", which is a reference to the 1987 movie Full Metal Jacket. Gunnery Sergeant Hartman says this right before he is shot by Pvt. Lawrence ("Pyle").

Sometimes, upon fast traveling to Megaton, he will spawn right in front of the player character instead of inside the armory.[verified]

Deputy Steel on guard
Add a photo to this gallery

Retrieved from "https://fallout.fandom.com/wiki/Deputy_Steel?oldid=3381588"
Community content is available under CC-BY-SA unless otherwise noted.