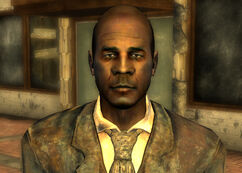 “Interested in politics, eh? Well, grab a seat and get comfortable.”

Dennis Crocker is the ambassador to New Vegas for the New California Republic in 2281. His full title, according to Ambassador Crocker's note, is 'Ambassador Extraordinary and Plenipotentiary'.

Ambassador Crocker began his political career as a mayor in NCR sometime before 2261, and worked his way up through the ranks. He was the head of Kimball's campaign for his successful run for NCR Council, which he attributes to why he has his current position. Crocker is a strong believer in diplomacy and hopes to unite the Mojave Wasteland under the NCR peacefully. However, his work has made very little progress since Mr. House refused to even meet him in person after signing the New Vegas treaty.

Ambassador Crocker is the third successor of the title of ambassador to the Strip following Susanna Edith, and is in his seventh year of Ambassadorship in 2281. He keeps himself busy with day-to-day paper work and aiding the NCR police in keeping troops in line on the strip. Though he hopes for the annexation of New Vegas, he has little hope for success, and believes his predecessors expected too much of Mr. House in this area. Crocker believes once the Legion is no longer a threat to the Mojave, negotiations may be able to proceed at a better pace.

Dennis Crocker appears only in Fallout: New Vegas, and is mentioned in Lonesome Road if the player has high reputation with the NCR.

Dennis Crocker was originally intended to be a Caucasian male, however, due to an error, a non-Caucasian voice actor recorded his lines. The character's appearance was altered accordingly.[1]

Retrieved from "https://fallout.fandom.com/wiki/Dennis_Crocker?oldid=3127023"
Community content is available under CC-BY-SA unless otherwise noted.