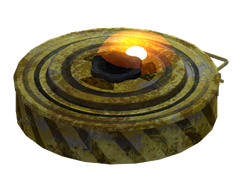 The demolition charge is a weapon in the Fallout: New Vegas add-on Dead Money.

Unlike normal mines, this explosive was supposed to be used for construction, instead of combat. It was brought to the Sierra Madre in 2073, four years before the Great War, during the construction of the resort. It was used to aid in building the Villa because rocks and caves prevented building houses there. The charge helped construction workers build the Residential District and the corridors.[1] Later, codes for the Sierra Madre vending machines were utilized to create demolition charges in addition to other tools.[2] After construction was completed, the remaining demolition charges were deemed too dangerous and harmful to store in an explosives cache, and were disposed of.[3] However, the vending machine code was not removed from the production list of the vending machines, and the charges can be purchased from them if a backup of the code is found.[2]

Demolition charges are explosives primarily designed for construction or civil engineering use, or for combat use by engineers to destroy fortifications or other hardened targets. They differ from anti-personnel mines in that they have no wounding fragments to disperse, and from anti-tank mines in that they are designed as general-purpose explosives, rather than armor-piercing ones.

The demolition charge looks similar to a normal frag mine but has a black striped yellow case and a bright yellow light, rather than a small red one.

In terms of damage, the demolition charge is almost identical to the standard frag mine, inflicting one additional point of damage. It also has no skill requirement, compared to the frag mine's minimum Explosives requirement of 25. However, these advantages are dramatically offset by the item's weight: each demolition charge weighs 1.5 pounds, compared to the half-pound weight of a frag mine. Nonetheless, demolition charges are one of the only two proximity-detonated explosives available in the Sierra Madre, and the one most damaging to the ghost people.

Once armed and placed, picking up the item will add a frag mine to the player character's inventory, instead of a demolition charge. [verified]