Explosives do more damage and always detonate on time 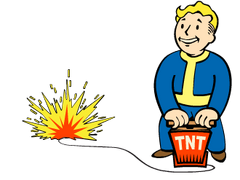 Demolition Expert is a perk in Fallout 2, Fallout 3, Fallout: New Vegas, Fallout 4, Fallout 76, and Fallout Tactics. It is also a skill that was to appear in the canceled Fallout: Brotherhood of Steel 2 (skills in this game work like perks do in other Fallout games).

“You are an expert when it comes to the fine art of handling explosives. They always go off when they're supposed to, as well as causing extra damage.”— Fallout 2 In-game description

For characters that like to blow things up, there is nothing better than this perk. Explosives set by this character do more damage and always detonate on time.

In Fallout 2, dynamite and plastic explosives cause an additional 10 points of damage.

With each rank of this perk, your character will do 20% more damage with mines and grenades.

Although weapons such as the missile launcher and Fat Man fire explosive projectiles, they are considered Big Guns and are not affected by this perk. However, the Fallout 3 Official Game Guide claims that the perk does work on missile launchers.

With each rank of this perk, your character will do 20% more damage with all weapons governed by the Explosives skill.

Note that this damage bonus only affects the actual explosive part of the weapon's damage, not the physical impact. For grenades and mines this is a negligible difference as they typically only deal 5 physical throwing damage at most. But for a Fat Man (GRA) it is much more significant as 400 of its 1000 base damage is from the physical impact.

Prior to patch 1.4.0.5xx, the Demolitions Expert perk only applied to weapons listed in a specific Form List, which contained a few notable (and undesired) omissions. The patch subsequently expanded the Demolitions Expert perk to apply to all weapons governed by the Explosives skill, unique, DLC, or otherwise. For reference, a full listing of Explosives-skill weapons follows.

“The bigger the boom, the better! At the highest ranks, a proficient expert can craft a potent bomb or ten and lob them all at even the most dangerous of marauding foes, dropping the enemy before engaging in closer combat. Are you a fan of mines? Do you enjoy using V.A.T.S. to shoot grenades or mines close to or carried on an enemy? Then think about this perk.”— Fallout 4 Vault Dweller's Survival Guide description

Demolition Expert increases the damage dealt by thrown grenades, mines, explosive weapons such as the missile launcher and Fat Man (these also stack with the Heavy Gunner Perk) and even the legendary Explosive prefix.

Should this fail - Use the console command 'player.removeperk' for all levels 1-4 and either re-select/enable these perks through normal Tab-T entry or 'player.addperk' commands. [verified]

“The bigger the boom, the better!”

Demolition Expert is a perk in the Nuclear Winter battle royale mode. It requires 3 SPECIAL points to equip.

Retrieved from "https://fallout.fandom.com/wiki/Demolition_Expert?oldid=3430701"
Community content is available under CC-BY-SA unless otherwise noted.