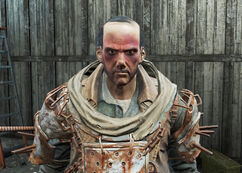 Demo is a raider in the Commonwealth in 2287.

Demo is the leader of a small group of raiders occupying the Hardware Town store. They have lured a number of settlers and traders to their death by having a decoy claim there is an injured person that needs help inside the store. Demo normally has them lured in through the basement, allowing his group to ambush them as they come up into the warehouse area of the store. Besides the gift shop terminal talking about his successful tactics, no other background history is found.

If one sneaks into the building via the cellar, rear loading bay doors or the front door (by eliminating the settler acting as a decoy), Demo and his raiders can be overheard arguing. After a short time, Demo warns another raider to shut up or he will, "make sure he can't annoy him ever again." Waiting further will result in the raider speaking again and Demo will kill him.

Demo appears only in Fallout 4.

Retrieved from "https://fallout.fandom.com/wiki/Demo?oldid=3176837"
Community content is available under CC-BY-SA unless otherwise noted.