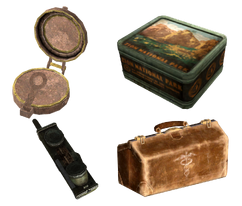 Deliver these four items to Daniel

Resupplied Daniel and the Sorrows

“Normally, we would have some of the Dead Horses or Sorrows look for them, but many pre-war buildings in the valley are taboo. They won't go inside”— Joshua Graham

Deliverer of Sorrows is a main quest in the Fallout: New Vegas add-on Honest Hearts. It is the culmination of the three connected item-gathering quests Gone Fishin', Roadside Attraction and Tourist Trap.

To get the compass, go to the crashed scout bus. The compass will be under a child's skeleton and other pre-War belongings. However, the compass is seen to be long-since broken, with the possibility to repair it with a Repair skill of 30 available, or with a nearby compass sensor module just beside the compass.

To get the walkie-talkies, go to the Zion Fishing Lodge. They are inside an Average locked cabinet behind the bar counter, which can be opened with a key located inside a box in the bathroom.

To get the Li'l Scout lunchboxes, head to the Zion General Store, and collect all five of them scattered across the store. One can be found inside a crate/box on the floor on the left side of the shop. Another is inside a broken metal cabinet at the back of the shop, where it is partly hidden behind a broom, which may need to be moved in order to pick up the lunchbox. Two are on the counter on the right side of the shop. The last one is inside the locked desk at the back of the shop. A Lockpick skill of 50 is needed to open the desk without a key. There are two keys for the desk: one is in a nearby toolbox, and one is in a cash register.

On the way into the Sorrows camp to meet Daniel, the Courier will be welcomed by Waking Cloud. 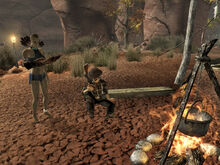 Deliver the items to Daniel
Add a photo to this gallery
Retrieved from "https://fallout.fandom.com/wiki/Deliverer_of_Sorrows?oldid=2907036"
Community content is available under CC-BY-SA unless otherwise noted.