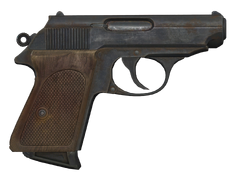 The Deliverer is a unique weapon in Fallout 4.

A cutting edge pre-War design, the Deliverer combines firepower and subtlety in one, compact package.[1] In terms of design, it is a small, concealable pistol. It features an exposed hammer, a traditional double-action trigger mechanism, a single-column magazine and a fixed barrel that also acts as the guide rod for the recoil spring. The shorter grip, barrel and reduced magazine capacity result in a smaller size than other pistols of a comparable caliber and made better suited for concealment.[2]

The handgun has an exposed hammer and a double-action trigger mechanism. The fixed barrel also acts as a guide rod for the recoil spring.

This old handgun was recovered and restored by Tinker Tom for Railroad heavy agent Tommy Whispers, called the "Deliverer."[3] He still had the pistol in his possession when he was killed at his faction's old HQ, the Switchboard when it was raided by the Institute's forces. When the Sole Survivor and Deacon return to the site to recover a lost prototype of an unknown device for Doctor Carrington, the Deliverer is recovered by Deacon and offered to the Sole Survivor. One can decline to take the weapon, however, Deacon insists in transferring it to the player character.[4]

The Deliverer is a compact semi-automatic handgun chambered for 10mm rounds and is found with a suppressor. While it uses the same ammunition as the 10mm, the Deliverer outperforms comparably modified 10mm pistols in almost every area. It also comes with the "V.A.T.S. Enhanced" effect, which grants increased V.A.T.S. hit chance and 25% lower action point cost. This, combined with its pre-attached suppressor, makes the Deliverer an excellent sidearm. However, there are no scope mods available for this weapon, limiting its range and accuracy. This weapon also has little recoil, allowing for deadly rapid fire. The pistol can be fitted with a comfort grip or sharpshooter's grip for more accurate shots and recoil control. The Deliverer's default magazine holds 12 rounds, with larger custom magazines increasing its capacity to 16 rounds.

The Deliverer's default suppressor reduces its effective range but silences the weapon. With the introduction of the Nuka-World add-on, the Sole Survivor can obtain the Ace Operator perk by remaining allied with the Operators. This will increase the effective damage of the Deliverer further while its suppressor is equipped.

Rewarded by Deacon during the Railroad quest Tradecraft, after finding the body of Tommy Whispers.