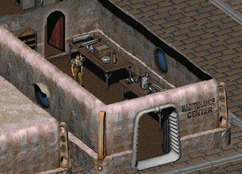 “The PROBLEM is, I can't just go out and buy some new ones, I have to requisition them from Vault City. That means filling out five billion lists, submitting them in triplicate, then WAITING.”— Valerie

Deliver pliers (tools) and a wrench to Valerie is a quest in Fallout 2.

Valerie is located in Vault City proper, in the maintenance building west from the Amenities Office. If you ask her what's wrong, she tells you that she needs a pair of pliers and a wrench.

Getting a wrench[edit | edit source]

Wrenches can be a bit harder to come by. Here are some options:

Once you have both the wrench and tools, return to Valerie. She thanks you grudgingly, then asks you to come see her the next day. In that time, her original order for a super tool kit arrives... and so does an excess of four more. She gives one to you quite readily, ranting about the ineptitude of the city's logistical personnel.

NOTE: The super tool kit (well, five of them, really, but she keeps the other four for herself, unless you steal them) arrives a day after you deliver the wrench and pliers, so you'll have to wait a day before getting it from her.

In addition, if Vic and Val have had their argument, and you have completed this quest, you can ask her to give Vic a chance for 250 further experience points.

Retrieved from "https://fallout.fandom.com/wiki/Deliver_pliers_(tools)_and_a_wrench_to_Valerie?oldid=3101422"
Community content is available under CC-BY-SA unless otherwise noted.