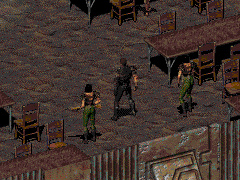 “With the completion of the new irrigation systems, our food supply far exceeds our needs. We wish to establish trade with the surfacers and exchange surplus foods for much needed medicines.”— Vegeir

Deliver Slag Message to Jo in Modoc is a quest in Fallout 2.

No hidden meanings; Jo is, in fact, that same guy in the southernmost shop nearest the red exit grid. The player character really does only have to go from the Ghost Farm to Modoc and talk to Jo.

Quest 8: "Jo is suspicious of the Slags. Find out about the dead bodies at the Ghost Farm and find out what happened to Karl." will immediately show up on the Pip-Boy 2000 unless the player character says to Jo, in the same conversation, "I want to take no further part in this," for 700 XP.

People will then act a little weirdly: traders and townsfolk in Modoc will talk as if there's going to be a deal with the Slags, the Slags act as if they're waiting for it to happen, and Jo won't talk to you again at all. After 31 days Modoc will attack the Ghost Farm; see the next quest for details.

Whichever way the player character chooses to deal with the Slag matter, from this point on Rose will allow them to rifle through the lost and found box and give them free omelets whenever they want them, but they won't be able to order any of the other stuff anymore. The lost and found box is sometimes empty and sometimes has random items: knives, throwing knives, stimpaks, 10mm JHP, a leather jacket or a 10mm pistol. On very rare occasions (1 chance in 200 every time the Chosen One enters the map) one can find a 10mm SMG in there. If one is impatient they can exercise their Steal skill on the box, and loot it freely if they stand on the hex just to the right of it.

After delivering the message to Jo, the Chosen One can return to Vegeir for a reward of an AK-112 assault rifle and fifty 5mm JHP.

Characters with an Intelligence less than four earn 2000 XP upon delivery of the note and trigger the happy ending for Modoc but do not get quest 8. The Chosen One also gets a discount on Jo's stuff, but only until they leave dialogue." - Per Jorner, The Nearly Ultimate Fallout 2 Guide[1]

Retrieved from "https://fallout.fandom.com/wiki/Deliver_Slag_message_to_Jo_in_Modoc?oldid=3183424"
Community content is available under CC-BY-SA unless otherwise noted.