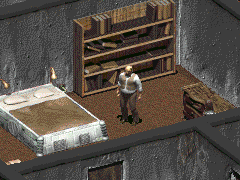 Deliver Big Jesus's package to Ramirez at the Stables is a quest in Fallout 2.

A fairly straightforward quest given by Big Jesus Mordino, although in order to be hired by the Family you have to jump through a few hoops. First, if you haven't been introduced by his son, Little Jesus (talking to him and asking for work, basically), you have to pass a Speech check. Next, if you're male and have a Strength of 6 or wear combat armor or power armor you will be hired. If not, that's another Speech check.

When you get the quest, you are automatically sent to the Stables. Just walk in and give Ramirez his package, then return to Big Jesus. It will turn out you delivered poison, as Ramirez's incompetence and addiction allowed three slaves to escape the research compound and Big Jesus does not tolerate failure. The Jet delivered by you contained a chemical that would stop the heart of the addict an hour after using the canister.

Obviously, opening the package and trying to give it to Ramirez means becoming target practice for Mordinos.

Retrieved from "https://fallout.fandom.com/wiki/Deliver_Big_Jesus%27s_package_to_Ramirez_at_the_Stables?oldid=2787688"
Community content is available under CC-BY-SA unless otherwise noted.