The Delano Grange is a location in the Mire region of Appalachia.

The Delano Grange has seen better days since the Great War. The house itself had its roof collapse entirely, but that did not stop survivors from seeking out life around the farm. Some walls around the farm were reinforced with sheet metal and wood, and brahmin were still herded at the farm for a time until the Scorched Plague would end any sort of normalcy for anyone. Now, the only thing that inhabits the Delano Grange is the ever-encroaching strangler vines.

The Delano Grange is a small farm area with a house and two sheds below it. There are a couple of trucks at the perimeter of the location, and a weapons workbench can be found along the walls outside of the farmhouse. Inside, there is a mattress on the floor and a crib next to it. To the left are two rocking chairs and some wood piles. In the kitchen, there is an explosives crate, a ginseng root houseplant, and various cooking-related junk items.

The northern shed has a radio that only plays static, more woodpiles, and, unsettlingly, a baby carriage with a baseball bat and a stain inside. The southern shed holds several tools and a toolbox.

The Delano Grange appears only in Fallout 76, introduced in the Wild Appalachia update. 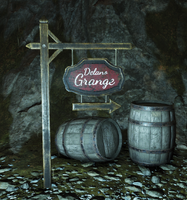