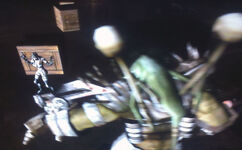 Defeat Raiders is a quest in Fallout: Brotherhood of Steel. Set in Carbon, one must take out the raiders who have been attacking the town.

After receiving the quest from Vidya the player must talk to Jesse to get the key that opens the back door of the Carbon warehouse. The player will then fight his or her way through the various areas of the Carbon Mill to bring vengeance on the raiders responsible for attacking the town of Carbon. The Initiate must eventually cause a fault in the generator for the mill to disable the security locks and gain access to grinder, where the raider matron Jane is held up. After a discussion with Jane a fight will ensue, where the Initiate will be tasked to Kill Raider Matron.

After obtaining the warehouse key from Jesse the Initiate must work their way through the railyard, fighting raiders and working through minefields along the way. Luckily the raiders are dumb enough to trigger their own landmines, allowing the player to avoid several fights by just letting them go run into the minefields while pursuing the Initiate. He or she will reach the exit leading to the Mill Exterior and an inaccessible raider camp in the same area. In order to open the gate, one must find a back route into the raider camp. The back entrance is protected by more landmines, but luckily they are easily avoided. Inside the raider camp the player will find the gate key needed, and Ruby's necklace. From the inside of the camp, they can open the front entrance to the raider camp and quickly exit the railyard.

The Mill Exterior follows a linear progression where eventually the player will find another Gate key, this one opening the gate to the Mill Parking Lot. Along the way, the player can again expect to find raiders and land mines. As the progression through this area is linear, the player will not need to search for the key, it can be found by looting the raiders next to the gate.

The Mill Parking Lot is free from raiders, but curiously the Initiate can find Jesse camped out here, begging the question of how he got here ahead of the Initiate, and exactly what ties he has to the raiders. He will welcome to player to the mill and answer a couple of questions that the player can ask. He jokes that the matron can be found through the northern part of the mill, because "she likes the vibrations". He will also direct the Initiate to activate the reactor to create some havoc, as he puts it.

To get to the reactor the Initiate must travel through the Mill Storage Area, fighting raiders along the way. The only interesting thing in this area is the Vault 13 flask. The next area is the Mill Generator Area. Once the player finds the generator itself he or she can activate it, causing a chain reaction of circuit overloads. Activating the generator also causes the alarms to activate, and doors to unlock, opening previously inaccessible areas.

After exiting the Mill Generator Area the Initiate will find himself or herself in the Mill Office Area, which ironically is filled with more of the same industrial equipment as the Mill Generator Area. Tesla coils will shoot arc lightning and pipes will vent steam, both posing a hazard the player must avoid on the way through the offices, back to the storage, and finally back out into the parking lot.

The only place left to go is to the previously inaccessible Mill Grinder Area. On entering the Mill Grinder Area the player will witness a confrontation between Jane & the super mutant leader Attis. He is buying slaves from her and insults her for selling her own kind. Their discussion will be cut short due to an explosion due to a chain reaction from the generator's activation. She attempts to ask for help in dealing with the situation, even going so far as to offer herself sexually, he refuses and leaves out the back.

The initiate must then Kill Raider Matron, and after defeating Jane he or she can return to Jesse in the parking lot for a ride back to Carbon.

“You found the raider matron - and she is pissed at you. Better kill her before she kills you.”— In-game description

After witnessing the confrontation between Jane & Attis the Initiate will be spotted by Jane, she will then challenge the Initiate about destroying her soldiers. During the Initiate's questioning, she will claim to be working for the Brotherhood of Steel, saying that she is offering information on Attis' army in exchange for protection and the Brotherhood turning a blind eye when it comes to her dealings with the townspeople and the mutants. She mentions that after her meeting with the Brotherhood that they went on to pursue the Mutants in a ghoul city, later revealed to be Los.

After confronting Jane about the Brotherhood a fight will follow. Electric volts arcing across part of this area pose a hazard through the fight.

Dealing with Jane, the raider Matron will net the Initiate 600 Experience Points. Moreover, after successfully clearing the mill of raiders and returning to Carbon the player can speak to Vidya to receive 100 bottle caps & another 600 XP. Also, if the player found Ruby's necklace and the Vault 13 flask while working through the mill they can turn these items in to Ruby and the Wasteland Stranger for an additional 100 bottle caps & 100 XP each.

Retrieved from "https://fallout.fandom.com/wiki/Defeat_Raiders?oldid=3275741"
Community content is available under CC-BY-SA unless otherwise noted.