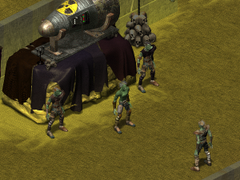 “Greetings. I am Defcon the second, son of T-minus, welcome to the holy land of Gravestone. Your Elder's want Plutonius, our idol of the supreme nuclear power. The mutants want Plutonius too, but they have no respect for our launch.”

Bishop Defcon the second is the spiritual leader of the ghoul town of Gravestone in 2197.

Before the Great War, Kansas City was a major nuclear launch site. After the city was hit by the bombs, the silo staff survived, but were turned into ghouls, who formed a town called Gravestone in the ruins of the city. The ghouls formed a cult worshipping the only nuclear bomb left intact in the silo, which they called "Plutonius". The ghoul in charge of both the town and the ghouls' religion was called the Bishop and his name was Defcon the second, son of T-Minus.

Defcon is a particularly leathery ghoul, and like Harold, grows a little bonsai out the back of his head.

Defcon appears only in Fallout Tactics.

DEFCON is an acronym standing for DEFenses readiness CONdition. It is a scale matched to severity of military situations that is used by the Joint Chiefs of Staff and commanders of unified commands. The scale goes from 5 to 1 where 5 is the standard peace-time readiness, and 1 is an imminent attack on American soil with WMDs. During the '50s, DEFCON 1 was supposed to precede an all-out nuclear attack.

Retrieved from "https://fallout.fandom.com/wiki/Defcon?oldid=3366042"
Community content is available under CC-BY-SA unless otherwise noted.