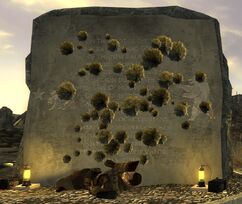 “It commemorates the Battle of Hoover Dam. The rangers lured the best of Caesar's Legion into Boulder City, then blew the whole town up. The NCR still lost a bunch of troops in the fighting, though. My older brother sacrificed himself so they could evacuate some of the wounded.”— Private Kowalski

Defacing the Humble Stone[1] is an unmarked quest in Fallout: New Vegas.

When visiting the War Memorial at Boulder City, the Courier will meet an NCR soldier, Private Kowalski. He is paying respects to his brother, who died during the First Battle of Hoover Dam.

Keep being disrespectful or apologize (Speech 30).

Whether the Courier has completed the quest or not, Kowalski will disappear after a few days.

Kowalski may state that the Courier defaces the monument when they did not. The Courier will have to pass the Speech check to avoid NCR infamy and once passed, Kowalski will no longer speak to them.[verified]

Retrieved from "https://fallout.fandom.com/wiki/Defacing_the_Humble_Stone?oldid=3335267"
Community content is available under CC-BY-SA unless otherwise noted.
... more about "Defacing the Humble Stone"
RDF feed
Has platform
PC +  and Xbox 360 +