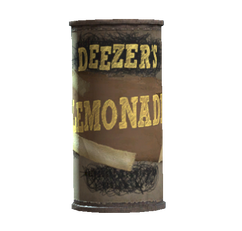 “Deezer's Lemonade is made of goodness! Four special ingredients from sunny, non-irradiated environments poured in one cold glass!”

Deezer's Lemonade is a consumable item in Fallout 4.

A refreshing can of lemonade produced by Deezer in Covenant. The can itself appears to be a purified water can with the labels scribbled out, and a handwritten cardboard label taped to the front of the can.

Deezer's lemonade is implied to not be made from real lemons, and the ingredients are often being questioned by passersby. There are several clues as to the content of the lemonade and its "four special ingredients." Deezer sometimes says, "less mutfruit, less rads, same great taste!" indicating that there is some mutfruit in the beverage. Its presence in modified purified water can be paired with the ability of Mister Handy robots to produce purified water (as shown by Codsworth) and the simple fact that every real-life beverage contains water all make water a likely additional ingredient.

The other two ingredients are unknown but Strong does indicate that the liquid is yellow and there are many non-player character conversations about it tasting odd, so it may not taste like traditional lemonade.

It is needed to bake Deezer's lemon cake donut from the Coffee and Donuts Workshop Pack.

Retrieved from "https://fallout.fandom.com/wiki/Deezer%27s_Lemonade?oldid=3398690"
Community content is available under CC-BY-SA unless otherwise noted.