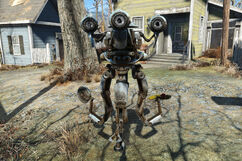 Deezer is a unique Mister Handy living in the Commonwealth in 2287.

Deezer is a Mister Handy living in Covenant. He makes a drink, known as Deezer's Lemonade, which is the town's signature beverage. He is very enthusiastic about his lemonade, stating that the town had voted his drink the best drink in town for three years, despite not knowing what is in the lemonade exactly. It is very likely that the lemonade contains no lemons at all, as noted by a few people.

Once per day, Deezer gives the player character one can of his lemonade for free.

Human Error: Deezer is evasive when asked about the missing caravan and cannot be asked any questions. If the player character investigates the attacked caravan, they will find a can of Deezer's Lemonade on one of the corpses, suggesting Covenant's involvement.

Several companions will interact with Deezer:

Deezer appears only in Fallout 4.

Retrieved from "https://fallout.fandom.com/wiki/Deezer?oldid=3398311"
Community content is available under CC-BY-SA unless otherwise noted.