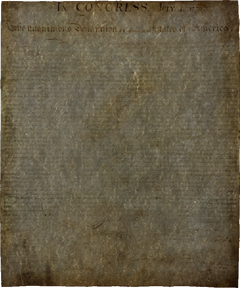 GECK render of the Declaration in the Capitol Preservation Society

“On July the 4th in 1776, a group calling themselves the Second Judgmental Congress got together at Fort McHarry in Maryland. After a ceremony which ended with Paul Revere singing the famous battle hymn known as the National Anthem, the document was signed. From there, it was sent to England by plane presumably and presented to King George himself. Thus began the Evolutionary War.”— Abraham Washington

The Declaration of Independence is an item found in the ruins of D.C's National Archives. It can be recovered by the Lone Wanderer for the Rivet City historian Abraham Washington.

The Declaration of Independence is a pronouncement adopted by the Second Continental Congress on July 4, 1776, announcing that the thirteen American colonies (then at war with Great Britain) regarded themselves as thirteen independent sovereign states, and thus were no longer under British rule. The colonies eventually became one sovereign state in the form of the United States of America. Written primarily by Thomas Jefferson, the Declaration is a formal explanation of why Congress had voted to declare independence from Great Britain, more than a year after the outbreak of the American Revolutionary War. The birthday of the United States of America is called Independence Day which is celebrated on July 4, the day the wording of the Declaration was approved by Congress.

In the National Archives' Strongroom, in a safe in the back of the room where one encounters Button Gwinnett.

Declaration, in the middle safe

The Declaration amongst the other artifact documents

Document placed in the low middle 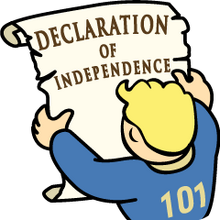 As depicted in Stealing Independence
Add a photo to this gallery

Retrieved from "https://fallout.fandom.com/wiki/Declaration_of_Independence?oldid=3448089"
Community content is available under CC-BY-SA unless otherwise noted.