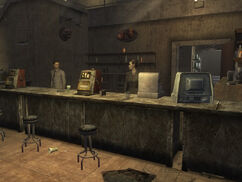 “I'd prefer you not to kill anyone with a debt. It's a bit difficult to collect on a corpse.”— Francine Garret

Debt Collector is a side quest in Fallout: New Vegas.

Talk to Francine Garret at the Atomic Wrangler, and ask if she needs any work done. She will inform the Courier that there are three individuals in Freeside that owe the casino caps. In total it will be 600 caps owed, and the player character will gain 150 caps if they return the caps to Francine (300 with a Speech or Barter check of 35). The three individuals are Grecks, Santiago, and Lady Jane. It is also possible for the player character to pay off the debt themselves.

Once these three are taken care of, Francine will have a fourth assignment. Her former collector, Caleb McCaffery, skipped town with a large sum of caps, and she wants him dead. His hat needs to be taken as proof of killing.

Bringing the hat back to Francine will finish the quest, earning 150 or 300 caps depending on the initial Barter or Speech check of 35, and Freeside Fame.

Jane's caravan, complete with Lincoln's head, in Broc flower cave
Add a photo to this gallery
Retrieved from "https://fallout.fandom.com/wiki/Debt_Collector?oldid=3417323"
Community content is available under CC-BY-SA unless otherwise noted.
... more about "Debt Collector"
RDF feed
Has platform
Xbox 360 +, PC +  and Playstation 3 +