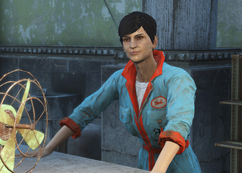 Deb is a merchant living in Bunker Hill in 2287.

Deb grew up with caravans, feeling at home in Bunker Hill,[1] and she uses her skills in machining and construction to produce wares for her shop, stating there is no such thing as junk.[2] However, she disagrees with Kessler's practice of paying off Raiders protection money,[1] especially as she takes a cut from the money.[3]

Depending on the actions taken by the Sole Survivor during Traffic Jam, Deb will praise their actions for clearing the National Guard training yard of feral ghouls prior to the quest being issued, referring them directly to Kessler.[4] Should more money be requested, Deb states she is tired of mercenaries declining the work.[5]

Deb is located in the trading shack at Bunker Hill, in the northeast corner. She is the general trader of the settlement. She sells shipments of fiberglass, crystal, gold, lead, and silver.

The player character can complete an unmarked side quest for Deb in order to access the workshop for Bunker Hill, along with the quests from Kessler and completing the Battle of Bunker Hill.

Deb appears only in Fallout 4.

Retrieved from "https://fallout.fandom.com/wiki/Deb?oldid=3327849"
Community content is available under CC-BY-SA unless otherwise noted.