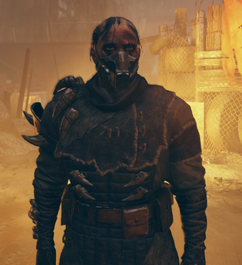 DeathKlaus is a slave competing in fighting tournaments at the Watoga Civic Center in Appalachia in 2103.

During the quest the Ol' Weston Shuffle, if the player character wins their matches up to that point, DeathKlaus is the loser of the second round and is killed when the slave collar around his neck is detonated.

Deathklaus appears only in Fallout 76, introduced in the Wastelanders update.

Retrieved from "https://fallout.fandom.com/wiki/Deathklaus?oldid=3468402"
Community content is available under CC-BY-SA unless otherwise noted.