Enclave (after The Waters of Life)

The deathclaw sanctuary is a location in the Capital Wasteland in 2277. It is located between Dickerson Tabernacle Chapel and broadcast tower KB5. It can be reached by traveling southwest from Fort Constantine, south from SatCom Array NW-05a, or east from SatCom Array NW-07c. As the name suggests, it is home to numerous deathclaws.

The deathclaw sanctuary is a cave maze that may turn back upon itself with some areas that can be climbed upon as a shortcut. There are multiple body piles and at least one pool of blood. The twisting tunnels and large obstructions are hazardous, but it is the residents that make this one of the most dangerous places in the Capital Wasteland.

Outside of the sanctuary is a small overhang concealing the body of a dead mercenary, several skeletons, and a footlocker with some loot. Further down the face of the cliff is a bridge crossing a large gorge. There will be one or more deathclaws (level dependent, but always at least one) guarding the entrance which respawn every three days. If the location is approached from the canyon entrance to the south, due west of Dickerson Tabernacle Chapel, a 'Type A' random encounter will spawn near the northerly rope bridge.

After The Waters of Life, an Enclave camp will appear on the nearby cliff northeast of the entrance. This usually consists of a Tesla soldier and Enclave scientists, as well as a mind-controlled deathclaw and two Enclave crates.

When traveling to the sanctuary from the west it is possible to fall into the gorge near the overhang as it is hard to spot among the rocks.

The interior is a dark, maze-like cave complex which contains between six and twelve deathclaws. The sanctuary seems to function both as a nest and a storage place, indicated by the many piles of maimed bodies and body parts that can be found in specific places. Several wastelanders, raiders, mercenaries, and rotting brahmin corpses are among them.

Before completing The Waters of Life quest, only deathclaws will be found here. However, after the arrival of the Enclave, a group of soldiers appear to have entered the caves to explore. This has an effect on the unique weapons found here (see the notable loot section). They spawn alive in the cave, but unless you cleared it out once before, they won't be among the living by the time you find them.

The deathclaw sanctuary appears only in Fallout 3.

Footlocker with Duck and Cover! inside at entrance. 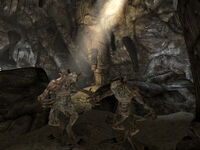 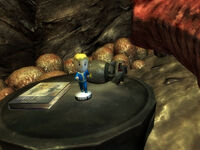 Endurance bobblehead, mini nuke and a Nikola Tesla and You

Vengeance found next to a bloody pool