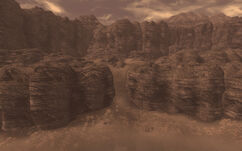 The deathclaw promontory is an unmarked location in the Mojave Wasteland. It is located on the east bank of the Colorado River, directly east of Lucky Jim Mine and the cliffside prospector camp.

The only way to access the promontory is via a dirt path north of the position marked by the picture to the right. It is a rough, uneven area over a cliff, with a labyrinth of hills, filled with a large number of various types of deathclaws. The area has been known to be inhabited by about 36 deathclaws total, varying from alpha males, mothers, and normal deathclaws, as well as young and baby deathclaws.

The deathclaw promontory appears only in Fallout: New Vegas.

The deathclaw promontory is situated in the same geographical location as the real world Promontory Point, a mountainous region in Clark County, Nevada.

The bodies sometimes disappear if revisiting the area

Deathclaw promontory overhead view in GECK. Dead power armor prospectors circled in red. North is left in the image
Add a photo to this gallery
Retrieved from "https://fallout.fandom.com/wiki/Deathclaw_promontory?oldid=3439786"
Community content is available under CC-BY-SA unless otherwise noted.
... more about "Deathclaw promontory"
RDF feed
Has platform
PC +, Playstation 3 +  and Xbox 360 +